The Twenty-seventh Italian Report on migrations 2021

Available on the NEAR website the maps for migrants and local citizens implemented in Milan, Perugia, Lisbon and Nicosia – Press Release 14.6.2022 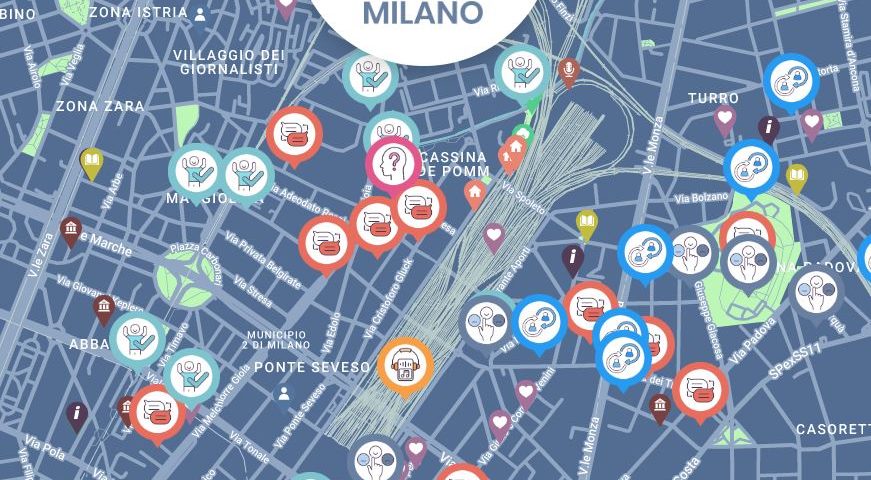 NEAR – NEwly ARrived in a common home kicked off.

These maps will facilitate orientation of those who have just arrived in the city, making them “feel at home”,
and encourage city dwellers to explore new ways of approaching their neighborhood

Milan, 14.6.2022. From now on international protection holders, asylum seekers, newly arrived minors and their families as well as international university students and refugees will have a new orientation tool for their city: the NEAR “Unconventional Maps”.

These “Unconventional Maps” have been developed as part of NEAR – NEwly ARrived in a common home, an innovative European project facilitating the integration of newly arrived migrants (adults and minors) during their settlement in the host countries. The maps have been implemented in the neighborhoods of four European cities: Lisbon (Bairro das Galinheiras), Nicosia, Milan (Central Station-Martesana canal) and Perugia. NEAR aims to activate a process of mutual trust, knowledge and intercultural exchange between migrants and local communities creating a sense of belonging to a “new common home” under the claim “Home is the place where I am right now”. It is funded by the EU Asylum, Migration and Integration Fund (AMIF) and coordinated by Fondazione ISMU (Italy) in partnership with Tamat NGO (ITALY), Cardet NGO (Cyprus), AidGlobal (Portugal), and Università Cattolica del Sacro Cuore (Italy).

The “Unconventional Maps” are a key orientation tool for newly arrived migrants and citizens. They have been conceived as true guidelines offering newcomers information and hints on the most relevant –institutional and unconventional – places and helping them settle in the new city and quickly feel “at home”.

These maps, which can be accessible via Web App (https://nearproject.eu/en/unconventionalmaps), are also meant to be a resource for citizens who wish to discover hidden spots of their city. What makes these maps unique, however, is that the “unconventional” places featured are the result of a co-design process conducted with the project beneficiaries, including diaspora members (Community Agents) as well as children and university students, who decided to share their experience, knowledge, stories, emotions and memories associated to the city.

Anyone can also contribute to the maps with new meaningful places by sending an email to the project. In the cities involved in the NEAR project a series of activities will also be lead up to a treasure hunt scheduled for fall 2022 where citizens and newcomers will be the real protagonists.

The “Unconventional Map” of Milan https://unconventionalmaps.com/near/area/milano/ covers the neighbourhood around the railway station (STAZIONE CENTRALE) along the rails up to the Naviglio della Martesana, historically a place of exchange that is meaningful to many who arrive in the city for the first time.

In that neighborhood, newly arrived migrants will find several helpful places ranging from local and diaspora organisations (including ALBA Trotter, EVA Association of Egyptian and Arab women in Italy) to consulates (e.g. the Eritrean, Tunisian and Peruvian consulate).

Thanks to the map citizens and newly arrived migrants will get to discover many intriguing places recommended by diaspora members and children who took part in the project, such as the “red bench” in Via Giocosa, the House of Muslim Culture, the Trotter Park, Bing Garden, Cascina de’ Pomm, the Biblioteca degli alberi park, ice cream shops and art movie theatres.

The “Unconventional Maps” for international university students. Unconventional Maps (https://nearproject.eu/en/unconventionalmaps) are also available for international university students who come to study in Milan, Perugia, Lisbon and Nicosia. This work is coordinated by the Università Cattolica del Sacro Cuore and involves the University for Foreigners of Perugia, the KES College of Nicosia and the ISCTE – IUL University Institute of Lisbon, with the aim of guiding newly arrived students as they enter their academic programmes. These maps not only contain orientation services offered by the universities but also key information on unconventional spots such as community venues, networking cafes and bars, sports centers, language classes, cultural places and suggestions for housing.

The Unconventional maps for international students are available on Near website (https://nearproject.eu/en/).

In addition to the Unconventional Maps co-created with foreign students together with representatives of international student networks, four handbooks have been produced to facilitate the orientation of newly arrived international students into the necessary administrative procedures for their stay in the city.

About NEAR. “NEAR – NEwly ARrived in a common home” is a European project that aims to facilitate the process of integration and social orientation of newly arrived migrants (adults and minors) during their settlement in the host countries. It is funded under the EU Asylum, Migration and Integration Fund (AMIF) and is coordinated by Fondazione ISMU (Italy) in partnership with Tamat NGO (ITALY), Cardet NGO (Cyprus), AidGlobal (Portugal), Università Cattolica del Sacro Cuore (Italy). The project involves the cities of Lisbon (Portugal), Nicosia (Cyprus), Milan and Perugia (Italy) and aims to activate a process of mutual trust, knowledge and intercultural exchange between migrants and local communities, building a sense of belonging to a “new common home”. NEAR aims also at creating a solid relationship between diaspora organisations, newcomers, local associations and citizens involved through a communication campaign designed with the beneficiaries of the project under the claim “Home is the place where I am now”.

NEAR will lead to several outcomes. It will empower diaspora associations members to become mentors for newly arrived migrants, it will facilitate access to services and labour market for asylum seekers and international protection holders, it will strengthen inclusion levels of newly arrived children of compulsory school age, and it will increase orientation and opportunities for newly arrived university students.